What makes the “Farm Family” so great is that all of us are different and unique in our own ways, but for one month every October, we come together as a cohesive unit to put on a great show. Without the folks that make up the “Farm Family”, Fear on the Farm would not be what it is today. Over the years, like any family, we have suffered our share of losses. Some have passed from age, others were tragically taken from us in accidents. Each death has left us with a void that cannot be filled.

This page is dedicated to the members of our “Farm Family” who have passed away. Each of them played a role in the success of the attractions over the years. Each of them contributed in their own unique way, with their own talents and personality. Their passing has left a void in our heart and on our team that will never be filled. This page is our way of making sure that they are not forgotten.

If 30 years ago, Don had not taken a chance on a city slicker (Dan) Fear on the Farm would not be here today. Don had the land and the tractors. Dan had the dream and the drive.On a handshake and a gentlemen’s agreement, they partnered together, neither one imagining how big it would become. Sadly, Don passed away in 2005, before we really hit our stride. Our newest attraction, the Diagnostic Operational Nexus, is nicknamed the DON in his memory.

Pops was Dan’s dad and Tyler’s grandpa. From him, Dan learned his work ethic and determination. Pops overcame many obstacles in his life and never let anything stand in his way. That is something that Dan always admired in his Dad and tries to emulate.

He was so much more to everyone else out here on the farm. He was the grounding force, the voice of reason, the steady rock that was always there when you needed him. He was proudest when he told people that his son was the owner and creator of the Haunted Hayride at McCray’s.

Every season as the crew was out on the trails building the newest scenes, Pops could be counted on to bring out food and drinks to keep the troops fueled and ready to go. He was the best kind of supervisor, always asking questions and offering his ideas and suggestions. He loved being in the thick of the action during the builds and the seasons. As we build new scenes and add on, we cannot help but ask ourselves, “what would Pops think of this?” We miss him every day.

Jorge was one of those friends who was just always there for you when you needed him. You knew when you were having a bad day, you could pick up the phone and call him and he would help you solve the problem. He loved to bring his friends and colleagues out to the farm and tell people that he knew the people that ran the haunted hayride. He was one of our biggest cheerleaders, supporters and sponsors. His untimely passing was a shock to us all. He loved being a part of the “Farm Family” and it is only fitting that we remember him here.

Will worked for us in the early days when times were lean and scenes weren’t as high tech. Like many of us who worked during the first decade, Will did a little of everything, as it was needed. Life got in the way for a while and there was a period where he wasn’t at the farm, but like any Halloween fan, he found his way back.

For the last 8 or so years, Will could be found driving one of the big red tractors down the trails every Friday, Saturday and Sunday in October. Some nights, he had his little girls riding in the cab with him. It was shortly after Haunt Season 2018, that he was killed in a terrible accident. He left behind 2 daughters, 3 stepchildren, his father, his wife and his entire farm family to mourn him.

Jeffrey was a second generation Haunter. His uncle Tim is our Pumpkin Farmer. When Jeff wanted a job in high school, it was only natural to pair him up with uncle Tim as the Creeper and have them work together. Jeff loved his time on the farm. He worked for us all through high school and beyond, until he moved to Florida about 4 years ago.

We were shocked and saddened to learn that once again a reckless driver had struck and killed one of our own as they were riding their motorcycle.

Carol loved dressing up as a witch when she worked as a cart monitor in the early years of the Hayride. People loved the friendly witch who passed out candy to her riders and chatted them up as they boarded the wagons. Her son and granddaughter still work every year.

Eric brought Leatherface to life for three seasons on the trail and in the haunts. He wielded the chainsaw just like in the movies.

The grandpa of several current cast members and father of a few past members, Pops Dombek was a fixture at the farm taxiing his brood back and forth to work on building scenes and scaring folks. He proudly worked our french fry stand its first season, shortly before he got ill.

Mike was one of our faithful tractor drivers in the early 2000s. He could be counted on to always add a few bumps and thrills to the ride to make it more entertaining for the customers. He was best known as the Shriners’ clown, Beeper.

*** If we have inadvertently missed someone who has passed away and has worked at the attraction, please reach out to us at bree1225@yahoo.com with the information and we will add them to this page. We do not want anyone to be forgotten. 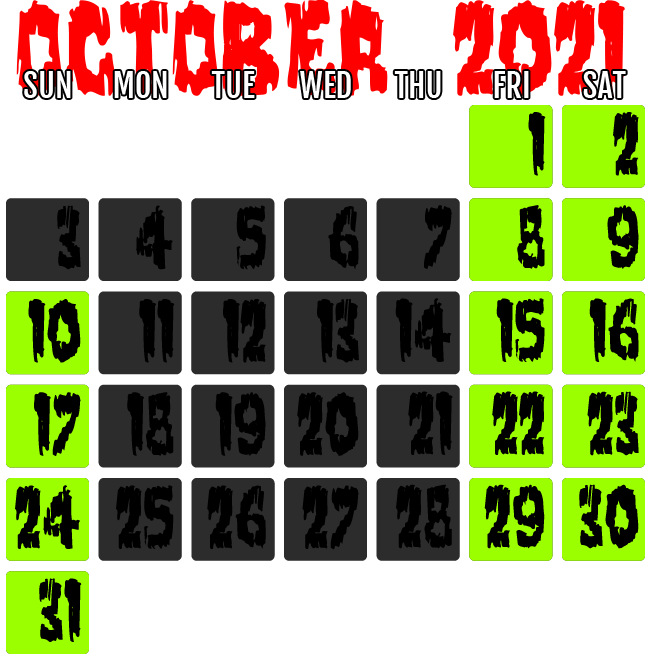